“They Call Me ‘Mister Entitlement" 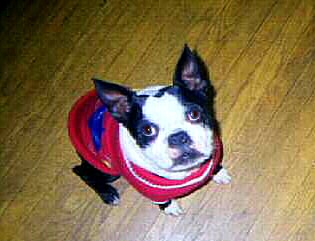 Nemo came to live with me (Ellen Gunty) 3 years ago, 1 month after the passing of my first Boston who remains near & dear to me. In fact when I got Nemo I thought the “paws he had to fill” were going to be much too big for him. It quickly became apparent that he wasn’t about to play “2nd banana to any dog. He had a different name when I first got him from a senior couple who considered him too big, too heavy, & too whiny when traveling. I named him Nemo because I had to look all over cyberspace to find him & like that now famous fish, he too has a “lucky fin” in the form of poor hearing in one ear.

I love that he is bigger and more muscular than the average Boston but at a now svelte 25lbs, there isn’t an ounce of fat on him.
Nemo was not shy about showing his true self in fairly short order. There is not a single mean bone in this dog’s body and we bonded within the 1st week.

He just loves to kiss people, especially children (much to their delight). However he also has the biggest sense of entitlement you will ever see in a dog, not unlike the Peter Sellers character in the movie “Being There”. You could say he’s on the “all Nemo Network”-all about Nemo, all the time! He ‘s a better traveler now but when I first got him, a trip to San Francisco was his limit before he started acting like a child who whined “are we there yet”.
He quickly developed a winning strategy for getting biscuits & treats from people where I have morning coffee. Naturally he is not impolite so “snatching” food is out of the question. Basically he knows how to “work a room” and is always careful to give everyone a kiss. This strategy has made him famous and beloved in the neighborhood. Even the bus drivers are enchanted so he gets to ride without being in a crate.

Like most Bostons he doesn’t “work” for a living or so he thinks. I’m a mediator so I take him to work when possible. The parties come with their “game faces” on until he struts in. Suddenly all you hear is oohs, ahhs, snorts of joy, then the petting & belly rubs begin. It’s a shared activity so before anyone realizes what’s happened, the climate of the room is much warmer & we can get real work done. However the most special Nemo story is something that happened shortly before my mother passed away recently. She had terminal cancer and came to visit one last time. I’m told dogs can “smell” cancer and judging by Nemo’s behavior , I believe it. For the 1st time I saw him keep his distance from us while maintaining a prudent eye on the activities. He simply would not go near her until one night I left for 10 minutes to get her favorite pie. During this time, she fell and was in a lot of pain. Watching these events unfold, Nemo decided his help was needed so he went over to her & thoroughly kissed her tears away which made her smile He then sat down right next to her, on guard, until I came home. This is one very special little guy indeed and definitely “entitled” to all the good things that come his way.

Posted by Dr Jeannie at 9:50 AM No comments: Links to this post