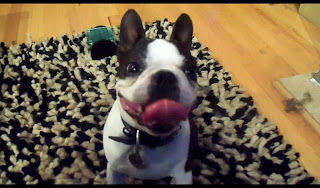 Since I was a young child, I have always wanted a dog. However, my mother was allergic to dogs so I was never able to have one as a child. Once I reached adulthood, life always seemed to get in the way of taking the time to get a dog. At the age of 44, I decided that it was time that I finally get a dog before I became too old to walk one without assistance.

As a practicing attorney, research is something that is second nature to me, and I, therefore, spent considerable time researching what breed of dog would be best for me and focused on those breeds which were smaller in size, suitable for city life, intelligent, great with people, and well-suited for a novice dog owner. My research led to me to decide on a boston terrier.

Although I strongly support dog rescues, I felt that because I was a first-time dog owner that a rescue may not be the best choice for me in light of the potential challenges associated therewith. Therefore, I decided to get my boston terrier from a show dog breeder. Rudy was born on December 26, 2010, and both of his parents were notable show dog champions. He was the runt of the liter, and the only of his three other siblings who was sold as a pet with the breeder keeping his remaining siblings to compete. I purchased Rudy shortly after he was born, and I then had a long approximate three month wait until I received him at twelve weeks old on March 24, 2011. During this waiting period, I joined Woof Board, which is the leading boston terrier discussion forum on the internet (my user name is Stuart60611) where I received (and continue to receive) a vast amount of guidance on how to best prepare for and raise my new boston terrier puppy.

A great deal of attention has been paid to train Rudy and thoroughly socialize him with both people and dogs. He has turned out to be an incredible companion who is very intelligent, energetic, well-behaved, and excellent with people and dogs of all sizes and breeds. One of the greatest joys of having Rudy has been being allowed the privilege to document his life through videos which are all available for viewing on his YouTube channel. Rudy has gained quite a following on youtube, and as you can see from his videos, Rudy is quite a character. He has been and continues to be everything that I could ever hope for in a dog.


Posted by Dr Jeannie at 7:29 PM No comments: Links to this post