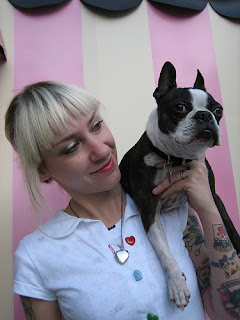 When most people come in contact with a Boston terrier they see a small, chortling, and often excitable little dog; for many of us the experience could best be described as cute, but when Erica Daking stares into the big brown eyes of her beloved dog, the connection is nothing short of inspirational.

Mighty, Daking’s 5 year old Boston terrier, is not only her precious pet and best friend but also the muse from which she draws a majority of her inspiration for her sleek and stylish fashion line- All Mighty Clothing. Daking’s designs are as adorable as the pup that inspires them. She makes recurring use of peter pan collars, scalloped edges, stripes and of course the lovable mug of her favorite K-9, for whimsical and playful pieces with names like ‘Pupcakes’ and ’Scrappy Meal’. For the daring (or less daring) fashionistas, Daking designed an entire collection with matching “Mommy & Me” shirts for both owner and her pup (pup shirt optional)

Daking spent 5 years working for independent clothing companies honing her skills as a designer & artist, meanwhile learning the day to day of running a small apparel line. It wasn’t long before the desire to produce original creations prompted her to start her own line in 2004. All-Mighty designs are influenced not only by her lovable little dog, but also by putting a distinctively modern twist on classic fashion movements like 60’s Mod or ‘50s kitsch and of course one of the industry’s oldest stand by’s: rock n roll. In fact, an early admiration for Sonic Youth’s Kim Gordon sparked Erica’s desire to start her own clothing line, such as Gordon did with X- Girl, her mid ‘90s apparel line. Also like her one time hero,

Erica has successfully used her love for one undeniably cute Boston Terrier and combined it with her own varied experiences, a keen eye for fashion, and a strong background in design to build All-Mighty.

Ericia's sister, Jen, is now a partner and of course is owned by a loveable Boston Terrier as well.

You can view Erica and Mighty's store Here

Posted by Dr Jeannie at 4:09 PM 2 comments: Links to this post