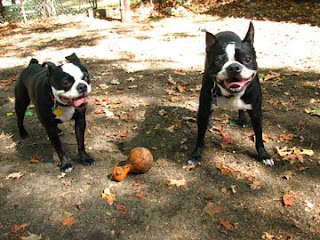 ''Mister Reusch is a freelance illustrator and teacher at Massachusetts College of Art in Boston who's done hundreds of editorial illustrations, concert posters, snowboard and helmet designs, and more. But his favorite subject is painting dogs,especially Boston Terriers. He wasn't allowed to have dogs in his old apartment, and he found himself constantly working the bug-eyed, bat-eared Bostons into his freelance assignments. Eventually, he began painting large full-color Boston Terriers for gallery shows, and donating prints and originals to worthy causes.

In 2006 Mister Reusch started a fundraising program with http://www.bostonbuddies.org, creating a series of four 14' x 11' paintings showing dogs running through the seasons; the background of each painting lines up with the others to create the illusion of one big panorama, though the background foliage changes in each according to season. Four times a year Reusch sent a signed-and-numbered print from the series to each of the first 10generous donors who pledged $100 or more to Boston Buddies. 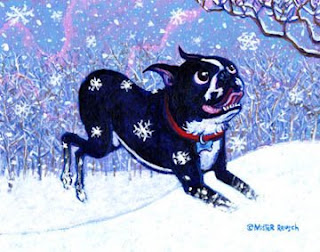 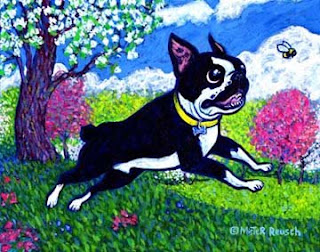 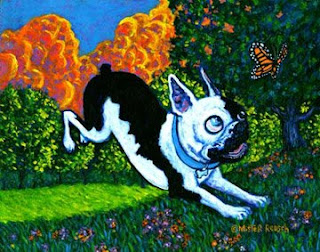 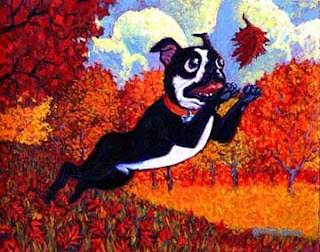 These days Mister Reusch and his partner Carrie live with two Boston Terriers,4-year-old Frankenstein and 8-year old Mr. Giles,(pictured above) a Hurricane Katrina refugee they adopted. The boys are a constant inspiration, and have appeared in many of Mister Reusch's recent artwork. He accepts dog portrait commissions regularly, so please visit www.DogsByReusch.com for more information."

Posted by Dr Jeannie at 11:40 AM No comments: Links to this post